In compliance with recommendations from local health officials, we are continuing to take precautions to ensure the safety of our guests and team members and have implemented enhanced cleaning processes, see here.

Enjoy freshly prepared American classics like our world-famous Legendary® Burgers, Smokehouse specialities, flavourful Salads and mouth-watering Desserts. Quench your thirst at our bar, with authentic cocktails, a great draught selection, and incredible Happy Hour offerings, we have something to suit everyone’s taste buds!

Be wowed by our walls adorned with authentic, one-of-a-kind memorabilia from decades of music history, featuring items from British music legends and international stars alike.

Online Seating Reservations for the Restaurant for up to 6 guests available now.

Due to the popularity of our location we take a limited amount of priority seating requests. Bookings for small groups are available on our website, if there is no availability you can come along on the day and join us on a first-come-first-served basis. For large group bookings please contact us here. Bar and outdoor seating is unreserved, and available on a first-come-first-served basis only.

*table reservation for a 2 hour period.

After enjoying an unforgettable dinner, don’t forget to stop by our Rock Shop® for exclusive Hard Rock Cafe Manchester merchandise. Great to add to an already established collection or as a memento of your visit. Choose from a large selection of collectibles including the classic Hard Rock T-Shirt, glasses, mugs, magnets and much more! 🛍️ #ShopHardRock

Please note that dogs are not permitted on our premises (with the exception Assistance Dogs, Service or Guide Dogs)

UNDER 18'S ARE NOT PERMITTED IN THE BAR AREA OF THE CAFE AFTER 9PM
UNDER 16'S MUST BE ACCOMPANIED BY A PERSON AGED 18 YEARS AND OVER.

WE HOLD ALLERGY INFORMATION FOR ALL MENU ITEMS, PLEASE SPEAK TO YOUR SERVER FOR FURTHER DETAILS. IF YOU SUFFER FROM A FOOD ALLERGY, PLEASE ENSURE THAT YOUR SERVER IS AWARE AT TIME OF ORDER. 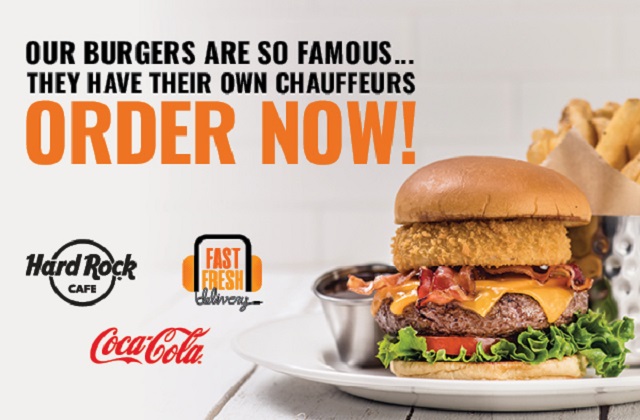 Order today and take the rock and roll home with you! Enjoy all of your favourites from the Cafe on the comfort of your couch!

Enjoy 20% off your Hard Rock Cafe favourites throughout the WHOLE of June!

Deliveroo - 20% Off EVERYTHING from Sunday to Thursday.

Collection - 20% Off ALL food & non-alcoholic drinks.

(Offer subject to availability. See delivery partner websites for any and all t&c's)

Deliveroo - 20% Off EVERYTHING with £15 minimum spend on Fridays and Saturdays for Deliveroo Plus members only.

We hear rock n’roll runs in the family 🤘 That’s why we are giving all kids the rock star treatment with a free meal! Visit Hard Rock Cafe Manchester for 1 FREE KID’S MEAL with every adult entree purchased! Available Sun - Thurs only, now through August 31st

SEE THE LINE UP HERE

Live Greatness is an open invitation to unite; to elevate collective moments, to inspire and to be bold. It is honouring our past while shining a beacon of light towards the future. We are proud to present our new ambassador: Lionel Messi. You can now get the new Lionel Messi x Hard Rock collection at the Manchester Rock Shop. Visit us and get your favourite merchandise items!

Our signature cocktails are Now Available To Go! 🍹😎 Serve over ice, and they're big enough to share or pop a straw in it, and it's a grown-up juicebox. 🥤
DELIVEROO UBER EATS

NO GLUTEN? NO WORRIES! 🤙

Our Gluten Free menu is still available, including tasty treats like our famous Hot Fudge Brownie 😋

Please speak to your server, or the Manager on Duty, for more information.

The Greatest Hits Sale is now on! It's your last chance to get hold of some of our legendary limited edition items.

Sale items starting from Just £3.95, available for Collection or Delivery with Deliveroo.

Our limited-edition Hard Rock masks are made from 100% cotton and are reusable. Make a statement with your new daily must-have accessory! Collect or order your mask today! 🛍️ #ShopHardRock

Manc You For The Music 📀

To celebrate our 20th anniversary, we released 'Manc You For The Music' a 20-track virtual album to celebrate Manchester's musical past, present, and future. Stream via the link below 🐝

We're serving up rockin' BBQ & Wing Bundles that you can enjoy from the best seat in the house – your couch! 🛋️

Be the man of the match and order your Big Game Bundle today! ⚽ Only available for Delivery & Pick-Up.

Get 20% off food and non-alcoholic beverages by showing your Automobile Club membership card AC, AAA or The AA.

We want to say a huge THANK YOU to all the hard-working emergency service workers in the UK. Show your Blue Light Card and receive 15% off food, non-alcoholic beverages and select merchandise! Find out more here.

ROCKING THE JOURNEY TOGETHER 🏍️

Hard Rock merchandise made its mark on the world with the timeless Classic Tee, which then inspired an entire assortment of merchandise, featuring hoodies & more! 🙌

Our Rock Shop is back open! Visit the store, or get our most popular items delivered to your door with Deliveroo. View the merchandise catalogue here.

We can make your next event unforgettable! 🔥 Whether you're looking for full venue hire, or area hire for networking, work socials, cocktail receptions, formal dinners, birthday celebrations, book launches, weddings or anything in between! Take a look at our venue pack here.

Talk To The Experts!

ARE YOU A GROUP TRAVELLING TO MANCHESTER?

Travel Trade, Tour Operator, School or Family groups of 10 People or more can dine from one of our Set Menus.